Thousands of people fled by a volcanic eruption in the Democratic Republic of the Congo from Mount Nyiragongo outside the city of Goma. Without warning, Nyiragongo Mountain turned the dark sky fiery red on Saturday night and then spewed lava flows into villages that destroyed more than 500 homes in the town of Goma near Goma International Airport, officials and survivors said.

A volcano is a place where gases, ash and / or molten rock material – magma / lava escape to the ground. In the process, molten rock, called magma in the asthenosphere, comes to the surface where it is called lava.

Types of Volcanoes
Volcanoes are classified according to the type of eruption and the shape developed on the surface. 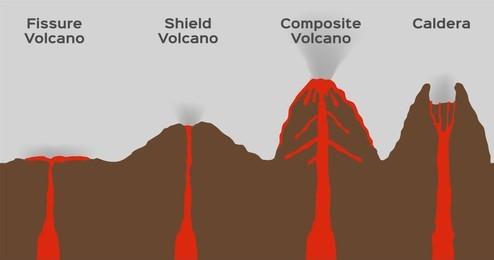 Based on eruption frequency:

Dormant volcano: Volcanoes that show signs of a possible future eruption are said to be dormant. For example: Kilimanjaro in Tanzania, also the highest mountain in Africa, is known as a dormant volcano.
Extinct volcanoes: Volcanoes that did not erupt in historical times but retain the properties of volcanoes are referred to as extinct, for example: Deccan Traps, India.
Active Volcanoes: Volcanoes are considered active when they erupt frequently and are mainly found around the ring of fire.
Example
Mount Nyiragongo

Nyiragongo (also spelled Niragongo), one of the most active volcanoes in the world, is a large stratovolcano with an altitude of 3470 m (11,385 ft) in the Virunga Mountains, connected to the Albertine Rift near the Kivu Lake on the eastern border of the Democratic Republic of the Congo with Rwanda in the Virunga National Park. It has a caldera 1.2 km in diameter that contains the largest and most active lava lake in the world. Nyiragongo and nearby Nyamuragira are together responsible for 40 percent of Africa’s historic volcanic eruptions

The Albertine Rift is the result of tectonic movements that are gradually separating the Somali plate from the rest of the African continent. It starts at the northern end of Lake Albert to the southern end of Lake Tanganyika

Distribution of volcanoes in the world

Citizenship Act Since its Inception